"TRIBRID Project" Registered as a JCM Project in Indonesia

―Aiming for an 80% cut in base station carbon footprint―

"TRIBRID Project" in Indonesia by KDDI and NEDO was registered as an official project under the Joint Crediting Mechanism (JCM), which facilitates diffusion of leading low carbon technologies as well as implementation of mitigation actions, and contributes to sustainable development of Indonesia.

TRIBRID System can reduce electric power consumption of Base Transceiver Stations (BTSs) by selecting most efficient power source depending on time of day and weather conditions among three sources: commercial-use electric power service, solar panel electricity generation and battery charging with late-night power service. In this demonstration project, TRIBRID System is installed to 20 conventional mobile communication's BTSs in Indonesia to demonstrate that the overall greenhouse gas emission of BTSs can be reduced by up to 80%.

This demonstration project has been also designated as a commemorative project on The 60th Anniversary of Japan-Indonesia Diplomatic Relations. 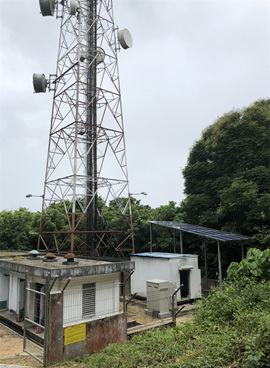 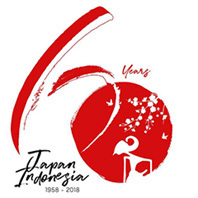 Official logo of The 60th Anniversary of
Japan-Indonesia Diplomatic Relations

In Indonesia, while BTSs are proliferating as mobile phones come rapidly into widespread use, many BTSs lack access to commercial-use power service and are subject to power outages. Diesel electric power generators installed to ensure stable power supply consume fuel and impact the environment.

In January 2015, KDDI began introducing TRIBRID BTSs in Indonesia as part of an initiative of the Ministry of Economy, Trade and Industry(METI)[*1].By January 2018, a NEDO program[*2] had completed the adoption of TRIBRID System at 20 BTSs in Indonesia and was moving forward with the Demonstration Project. TRIBRID BTSs make efficient use of power by alternating commercial-use power, solar power and late-night battery charging, depending on time of day and weather conditions. KDDI built the first TRIBRID BTS in Japan in December 2009. Since then, the number of TRIBRID BTSs has expanded to 100 nationwide.

On July 10th, 2018, "TRIBRID Project" run by NEDO and KDDI in Indonesia was approved and registered as an official project by the Japan-Indonesia JCM[*3] Joint Committee.

This demonstration project are designed to verify electric load control at BTSs, which involves managing the power generated by solar panels, power stored in lithium ion batteries, commercial-use power service and power supplied by diesel generators at TRIBRID BTSs set up in Indonesia. While making it possible to reduce greenhouse gas emissions and cut diesel fuel consumption, TRIBRID Technologies also make it possible to ensure long-term stability in the telecommunications environment. Since all of the parts necessary for TRIBRID System are procured within Indonesia, TRIBRID Project also contributes to Indonesia's industrial development. This project will verify the effectiveness of TRIBRID System at BTSs in tropical rainforest locations and through the monsoon season. As progress is made in optimizing the system for a wide range of environments, the project aims to have demonstrated by its conclusion in February 2019 the energy conservation equivalent of a cut of up to 80% in greenhouse gas emissions.

Moving forward, NEDO and KDDI will cooperate with the Indonesian Ministry of Industry to further spread the use within Indonesia of patented TRIBRID technologies used in Japan. By converting 5% to 10% of the base stations in Indonesia that lack commercial-use power sources or are otherwise susceptible to power supply instability, they aim to improve energy conservation by the equivalent of approximately 70,000 tons of greenhouse gas emissions per year.

On June 21, 2018, this demonstration project has been recognized as a commemorative project on The 60th Anniversary of Japan-Indonesia Diplomatic Relations [*4]. 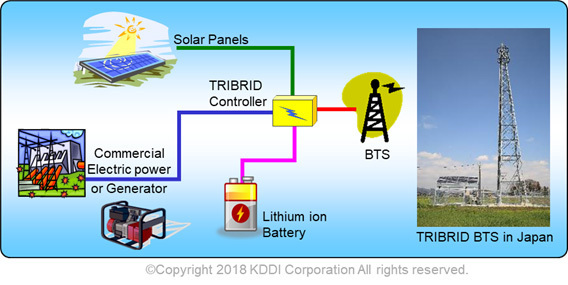 Notes:
[1] See the KDDI news release issued on Jan. 14, 2015: "KDDI tackles global warming with international TRIBRID base stations"
English
Japanese
[2] NEDO program
Original program name: JCM Feasibility Studies and Demonstration Projects
Project period: FY2011～FY2022
Budget: ¥1.3 billion (FY2018)
Visit the following URL for a program overview
http://www.nedo.go.jp/english/other_20161111.html?from=key
Since 2018, the program has been referred to as the "Program to Facilitate Private-Sector-Led Promotion of Low-carbon Technology Overseas"
[3] Joint Credit Mechanism system (JCM)
In cooperation with the partner countries, JCM works to reduce emissions of greenhouse gases, and to split the benefits between the two countries. For more information, visit the URL below:
https://www.carbon-markets.go.jp/jcm/index.html
[4] Projects marking the commemoration of the 60th anniversary of the establishment of Japan-Indonesian diplomatic relations
For more information, visit the URL below:
https://www.60jpid.com/